Currently, mostly just newer developments are connected to a fiber network. The rest of the city relies on cable networks, which have limited options (Comcast or CenturyLink). If the whole city were connected to fiber, residents would enjoy higher internet speeds and be able to select from dozens of internet service provider options.

The question is, how does the fiber network get built, and who pays for it?

One option for the city is to partner with a company called Utopia, a Utah-based company that has brought fiber to cities such as Orem, Murray, Midvale and West Valley City. The company offers to a city to build the fiber network infrastructure, which is about a two- to three-year project and would cost about $30 million. Then, if at least 35% of Herriman residents sign up to use that newly built fiber connection, the city doesn’t owe Utopia a cent. However much of the city falls short on sign-ups, the city has to pay the difference.

Regarding this option, Councilmember Jared Henderson expressed concern that it would amount to awarding a monopoly for what many people consider to be a utility, to just one company.

“The city’s basically bankrolling one company’s ability to put the road in, then they get to own it and charge our residents to use it,” he said. 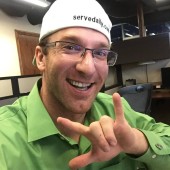